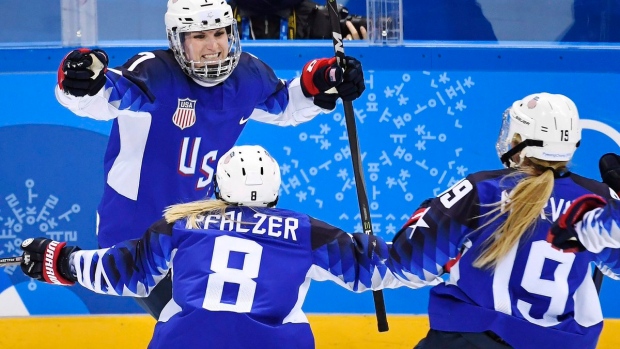 Team Canada’s bid to win their fifth straight Olympic gold medal in women’s hockey fell short on Thursday as they fell to the Americans by a score of 3-2 in a shootout.

Jocelyne-Lamoureux-Davidson notched the shootout winner in the sixth round.

.@usahockey claims the #Gold medal in women's #IceHockey at the #PyeongChang2018 #Olympics over #TeamCanada by winning in the shootout. #TeamUSA pic.twitter.com/eOlMFolNDf

Despite the loss, 🇨🇦 adds another medal to their total as they capture their 6th silver medal of the #Olympics. #PyeongChang2018 pic.twitter.com/0jfBbwxyi0

After falling down 1-0 after the first period, Canada struck early in the second on a goal from Haley Irwin before adding another from Marie Philip-Poulin to make it 2-1 heading into the third period. The Americans would tally late in the third period of action thanks to Jocelyn's twin, Monique Lamoureux-Morando.

Overtime solved nothing, as this one needed the dreaded skills competition to solve in what was another classic in this storied rivalry. American goaltender Maddie Rooney registered 29 saves and stopped four shooters in the shootout.

It was the American’s first gold in the event since the 1998 Olympic Games in Nagano.Three of Canada's previous gold medals came against the States, with the 2006 Winter Games in Turin being the only exception when they defeated Sweden.

Here’s some of the best reaction from the internet.

One hell of a game!! Thank you Ladies for an entertaining night! Nothing to be ashamed of for Canada. You put up one hell of a fight. Congrats USA on ending the drought #GoHockey @HockeyCanada @usahockey

On the 20th anniversary of the inaugural #WomensOlympicHockey #Gold Medal Game, the #USA wins it for the 1st time since then (3-2 in a shootout over #CAN)

Streaks are made to be broken. pic.twitter.com/pX8EpB2eNJ

Much respect to @HC_Women 🇨🇦 You had the nation on the edge of our seats. You always re-affirm our Canadian pride with your relentless effort 👏🏾👏🏾👏🏾 #Olympics pic.twitter.com/x8g6LD95ug

You know how I feel about shoot outs in a gold medal game...

What a shitty way to end a great Gold medal final. Shootout isnt the way you decide this. Too much work and sacrifice put into a tournament like this. #Garbage

What a freaking game!!! Fitting 🥇 for #TeamUSA, capping an unbelievable year. They stood together in solidarity, won landmark deal for women’s hockey in compensation, benefits, treatment. Now they end a 20-year #Olympic drought against 🇨🇦. Special group.

Team USA ends its 3-game losing streak against Canada in the gold medal match, winning 3-2 in a shootout. pic.twitter.com/xlTAwppyU4

20 years in the making. pic.twitter.com/LiR37XWett

The impossible becomes possible when you BELIEVE! 38 years ago today! #teamUSA pic.twitter.com/AY5J7FSKAu

So proud of @AmandaKessel8 and the whole USA Women’s National team. #letsgousa #goldmedal

We all know the next step for him... pic.twitter.com/wDb3uNLrmo

What a game! Thank you 🇨🇦 🇺🇸! Great drama! #CanvsUSA

This #TeamUSA #Hockey victory has me feeling just like this.... pic.twitter.com/tgEacM3QAR

Ah crap. Proud of our 🇨🇦 girls, but that is such an awful way to decide a gold medal.

Ah crap. Proud of our 🇨🇦 girls, but that is such an awful way to decide a gold medal.

What a game. Congrats 🇺🇸 and kudos to @HC_Women who put up an incredible fight. 🇨🇦

P.s - has anyone checked to see how Scott Moir is doing?

What a hockey game!!! 🥈🇨🇦🇱🇷 🥇Both teams showed what Women’s hockey is all about!! @ShannonSzabados you were once again amazing 👸 #CANvsUSA

The Americans deserved it. Good for them.

What an incredible #IceHockey match! 😱 Team #USA takes the #gold medal for the first time since #Nagano1998 in a thrilling shootout against #CAN. Congratulations! 👏👏👏 #PyeongChang2018 #Olympics pic.twitter.com/N9pOPHVOb8

We always knew you were golden, @HilaryKnight!

Hats off to you @usahockey! Great game and well deserved gold medal. Bitter sweet seeing my country lose, but extremely happy for all of my past American teammates and opponents through the NWHL. 🇨🇦🇺🇸👊🏻🏒 #CANvsUSA - HB

Congrats to all my American 🇺🇸 friends & to the @usahockey women on a well deserved #GoldMedal win. You were the better, quicker team in OT and should of had it then. Enjoy the moment, you’ve earned it! #PyeongChang2018 #Olympics #IceHockey #CongratsUSA #GoldMedalGame pic.twitter.com/i46wXGEOcD

Real talk though, Shannon Szabados could not have put on a better performance. That was some of the best goaltending I've seen all year, across the sport as a whole. Absolute legend.

Can we make sure Scott Moir makes it back to his hotel room ok tonight?

For your play.
For your passion.
For hockey.

You will always be our heroes.

For your play.
For your passion.
For hockey.

You will always be our heroes.

Canada’s Jocelyne Larocque was not happy when she received her silver medal.

She took it off as soon as she got it.#WinterOlympics pic.twitter.com/AFml05ymuT

You can say she’s a... golden Knight 🥇🇺🇸 pic.twitter.com/ZTP4mq1qlH

A heartbreaking loss, but we and all Canadians are so incredibly proud of you @HC_Women. 🥈#PyeongChang2018 pic.twitter.com/8avDC3kdYb

They played with courage, composure, and grit. We are so proud of you!!!! https://t.co/OFeBOQ5Lsc

@ToreyKrug @Matt_Grzelcyk5 we couldn’t be more proud of the girls! Congratulations on gold so beyond deserved !!! 🥇🥇🥇 https://t.co/BM9cWpQj9r

Marie Philip Poulin, with tears in her eyes: “I’m so proud of these girls... I’ll remember this feeling every time I work out. Every time I train.” #PyeongChang2018 #Olympics #TeamCanada

As I watched the women all receive their medals, much respect to their play, skills and commitment to this day. Every 4 years the game gets better and better. Format is the format and my only complaint is that I couldn’t watch more of these 2 teams play