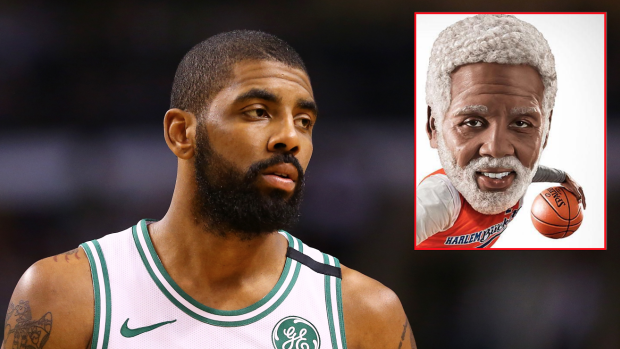 This past offseason, the Boston Celtics revamped their roster in order to be the last team standing in the East and ultimately win a championship, and by doing so, they weakened the Cavaliers.

Cleveland beat Boston in the Eastern Conference Finals last season, but the Celtics traded for Kyrie Irving in the offseason and he's led the way with Gordon Hayward out.

How does one find out about such a league-altering trade, though?  Sunday night, Irving's co-star in the 'Uncle Drew' movie Lil Rel Howery revealed how Irving found out about the trade and how he reacted to it.

Actor Lil Rel Howery describes the moment Kyrie found out he got traded while on set for 'Uncle Drew': "He was so happy, man." pic.twitter.com/pgxr6eR8g3

So, there you have it. Irving found out about the trade while on the set of Uncle Drew and he was happy once he found out, which is understandable considering all of the drama that went down before the trade was completed. It was rumoured that there was friction between Irving and LeBron and once those rumours start, they don't stop and only get worse, so you can only imagine the sense of relief Kyrie must have felt once he was finally traded.

Kyrie has detailed how he ran off the soundstage and processed the trade. "I took a moment outside on the side of the street in Atlanta to watch the cars pass. I took in that moment because it really meant something." https://t.co/bNoVbNQTl0

This is the scene Lil Rel said Kyrie shot immediately after hearing news of the trade. He was celebrating for real pic.twitter.com/IuVGJLX83T

I love Lil Rel but this makes me sad because clearly Kyrie was so happy that he was off the Cavs 😞 https://t.co/r7sSHLBQ8Z

Plus, LeBron and Kyrie are still friends, so it's all good!