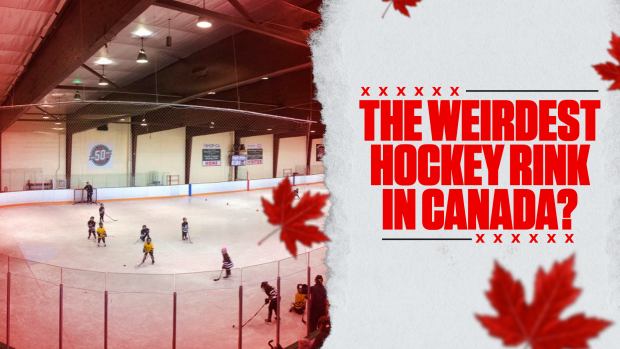 Has anyone else played at this rink?!

I’ve lived in Toronto for almost ten years now. Over that time, I’ve had the fortune of playing in quite a few rinks across the city.

But let me tell you… North Toronto Memorial Arena is not only the weirdest rink that I’ve endured in Ontario, but also in my entire life, and that’s not an exaggeration, folks.

Where dp I even begin with this place? Firstly, the dressing rooms are written on a chalk board, which is something you just don’t see too often anymore. Then you enter the rink and it’s straight chaos. There are massive windows that glare light directly onto the sun (and in my team’s case, into our goalie’s eyes), four flat-screen televisions BETWEEN the benches (has anyone ever seen that before?), the penalty boxes have no glass to protect players from the ice (and are huge), and if you needed a cherry on top… there were swimming noodles in the corner.

Oh- and a massive Tom Wilson banner on the bench. Just watch this…

I hope you’re not interpreting this all as me hating on the rink. I love barns like this one, they’re full of character. It was also about time I make the trip to NTMA because I’ve played enough opponents rocking the green and red pants over the years. I’m just simply pointing out that this one’s a weird one.

Apparently the hot dogs are pretty electric too, and the team slid into my DMs to invite me to try one. So looks like I’ll be making a trip back soon!

So… what’s the weirdest hockey arena that you’ve played in?