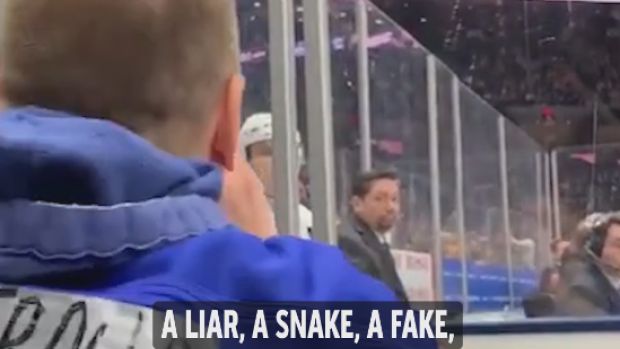 The second return to Long Island was much tamer for John Tavares, but the overall message for the former New York Islander's captain was still the same: John Tavares is a snake and a traitor for heading home to the Toronto Maple Leafs.

this sign is so funny to me, if john tavares is our april fool then i never want april to end pic.twitter.com/uh710S1QPX

But this time around, Tavares left with the game-winning goal that officially punched the Leafs into the playoffs, something the Islanders did only three times in Tavares' nine years on Long Island.

There were boos, chants, signs, but when Tavares eclipsed his personal best 86 points by notching No. 87 on his 46th goal of the season, the crowd inside Nassau was partially silenced.

That was until Tavares took a penalty, and when he was penalized inside the box, one particular Isles fan, who sported a Tavares jersey with duct tape over the nameplate and captaincy, decided it was time to tee off on the former captain of the club.

An #Islanders fan absolutely teed off on a penalized #JohnTavares.😲 • (🎥: Twitter/KEITHLAVITT)

That is one of the more aggressive rants you will ever hear come from a sports game.

Tavares clearly looked over and heard the fan, adding even more fuel to the lambasting. The security guard made sure the fan didn't cross the line with any vulgarity, but couldn't help but smirk away.

John Tavares on his second game back on Long Island:

"When you've been through it once there's a little bit more of a comfort level because you have a better idea of what to expect ..."