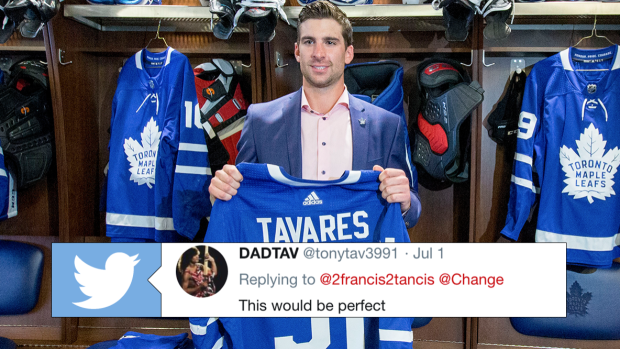 It's going to take a long time for Islanders fans to get over John Tavares leaving Long Island for his hometown team.

Ever since Tavares notified the Islanders he wouldn't be staying, fans have been burning his jersey and making their harsh feelings towards him known on social media.

It's probably safe to assume Tavares is going to hear some boos from fans when he returns to Long Island as a member of the Leafs, but some fans want to take things a step further:

There's a petition to have the Islanders retire Butch Goring's number 91 when the Leafs travel to Brooklyn in April 2019 → https://t.co/iO3KA2HV8h pic.twitter.com/Bbkl4GX27M

According to change.org, Frankie Narciso started the petition and here's his reasoning for wanting to retire Butch Goring's No. 91 when the Leafs are in town:

Butch Goring was the lynchpin to the Islanders dynasty teams of the 1980's. The trade to acquire him is routinely called the best deadline trade in NHL, if not sports, history. Now that his number 91 has been vacated, it is the perfect time to finally honor him as the important member of the dynastic Islanders, and the organization to this day, that he really is.

And what better day to do that than April 1st, 2019 at the Nassau Veterans Memorial Coliseum, against the visiting Toronto Maple Leafs?

The Leafs are in New York to face the Islanders before April 1st, but that game is significant because it will be played at the legendary Nassau Coliseum.

Goring had an incredible career that included being a key member of the Islanders when they won the Stanley Cup four times in a row in the early 80s.

Right now, just under 2000 people have signed the petition, but it's highly unlikely this will happen regardless of how many people sign.  Plus, after Tavares signed with the Leafs, Goring took to Twitter to wish him luck.

John Tavares was a great player for the #isles, but his dedication and commitment to success will remain with all his former teammates.I will miss his incredible imagination and skill, and I wish him the best