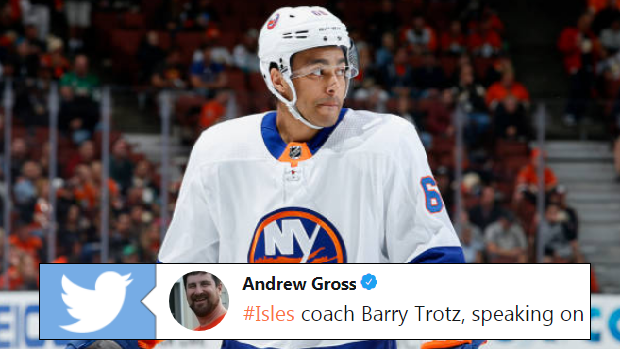 2014 first-round pick Josh Ho-Sang might finally be on the verge of playing in his first full NHL season.

The 22-year-old possesses undeniable skill but his questionable attitude has played a part in his inability to stick with the Isles. But with change comes opportunity. New York recently fired head coach Doug Weight and general manager Garth Snow, who was known to have his issues with Ho-Sang in the past. It also doesn’t hurt that John Tavares’ move to Toronto has created a vacancy up-front as well.

New Islanders head coach Barry Trotz was asked about Ho-Sang and had nothing but strong things to say about him on Sirius XM NHL Newtwork.

YESS HE NEEDS HIS CHANCE!!!!

A coach like Trotz could be the perfect fit for a player like Ho-Sang. The 55-year-old has dealt with huge personalities in the past and understands how to get the best out of his players. With 67 points in 100 AHL games before the age of 23, it’s tough to argue that Ho-Sang shouldn’t carve himself some sort of role for himself if he has the right bench boss leading the way.

Ho-Sang will be one of the more interesting youngsters to watch in the league heading into training camp.