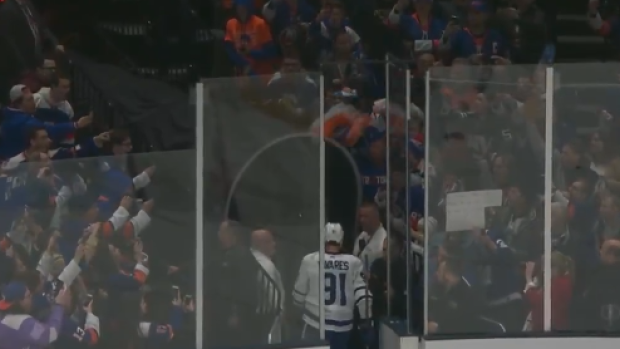 Tensions are high in Uniondale, New York at the Nassau Coliseum on Thursday, February 28th, 2019, the day John Tavares made his highly anticipated return to Long Island for the first time since signing with the Leafs last summer.

Quite the scene outside Nassau County Coliseum... never been part of a game like this where a once beloved, now polarizing figure comes back. Going to be a fun, unique and hopefully safe night for JT’s return pic.twitter.com/TCcAWhVwtJ

As expected, the Nassau Coliseum was highly hostile towards Tavares in warm-up, as the boos came roaring down as the Leafs and Tavares took the ice.

Atmosphere in warm-up is nasty pic.twitter.com/u3wKVm0aVI

During line rushes, couple of plastic snakes were chucked towards Tavares' direction.

John Tavares gets plastic snakes thrown at him in his return to New York pic.twitter.com/HKKHVskZ79

As Tavares exited the ice and headed back to the Leafs' dressing room prior to puck drop, one Islander fan chucked a sweater just before going through a tunnel.

An #Islanders fan threw a jersey at #JohnTavares as he exited warm-up.

For those who live in the Leafs region, you can watch all the action on TSN4