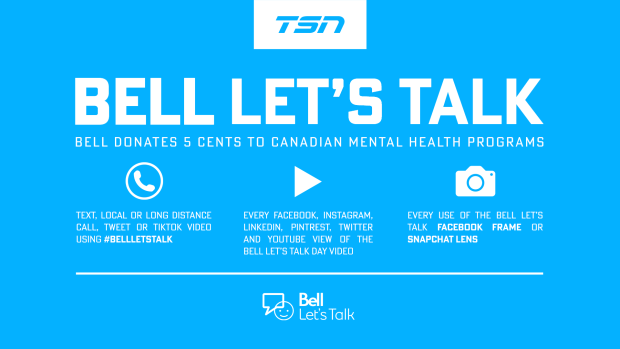 At some point in life, everyone will have an encounter with mental health.

Whether personally impacted or indirectly through family, friends and colleagues, we all come face to face with it.

It’s Bell Let’s Talk Day! Check out how these celebrities look after their own mental health and join the conversation. For each video view, Bell donates an additional 5¢ to Canadian mental health initiatives. #BellLetsTalk pic.twitter.com/3K0ZSvpm1h

There are several ways to continue spreading the word and raising awareness, from using the #BellLetsTalk hashtag on social media, to sending text messages, or even simply watching the official Bell Let’s Talk video, your support counts.

Be the teammate who checks in.

The teammate who shows up for others.

And the teammate who knows it's OK to show up for yourself.

There should be no stigma around mental health. #BellLetsTalk

My 6 year old niece got covid few days ago. She was devastated-not because she was sick, because she felt she let her mom and dad down. Our kids are having a hard time. #BellLetsTalk

Now more than ever, every action counts. Together we can create positive change. Join the conversation on January 26th. #BellLetsTalk pic.twitter.com/SLJ45SN6OT

The #Sens are celebrating our annual #BellLetsTalk game tonight. Don’t forget to use the hashtag tomorrow to support mental health in Canada. #GoSensGo pic.twitter.com/au7nhPhjSS

Jets fans, let’s keep, listening, talking and being there for ourselves and each other. Join us on January 26th to celebrate #BellLetsTalk Day! pic.twitter.com/YP6pBVSX9n