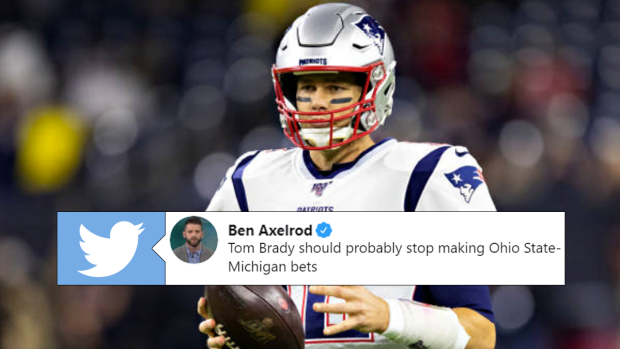 Tom Brady is widely considered to be one of, if not the greatest quarterback of all time. While this season has shown a little regression (he’s 42 it’s about time), he’s consistently shown the ability to win on the gridiron.

Unfortunately, he can’t say the same about his college betting skills. Or maybe it’s just his blind loyalty.

Tom Brady annually bets on Ohio State losing to his alma mater Michigan with teammates. So basically, Tom Brady annually gets punished. This year the punishment involved him posing for a photo as the “H” in a human spelling of O-H-I-O. The others are former Buckeyes Nate Ebner and John Simon, with Chase Winovich (a former Michigan man) completing the word.

Completely decked out in Buckeyes gear, you can tell just how excited Brady is in the photo.

Is it possible for a facial expression to talk? If so, we’re thinking Brady’s is saying some very NSFW jabs at the moment of this snap.

At least he continues to be a good sport!

Tom Brady walks through locker room in an Ohio State shirt. Lost a bet. "It's bad," he says, hustling quickly into equipment area.