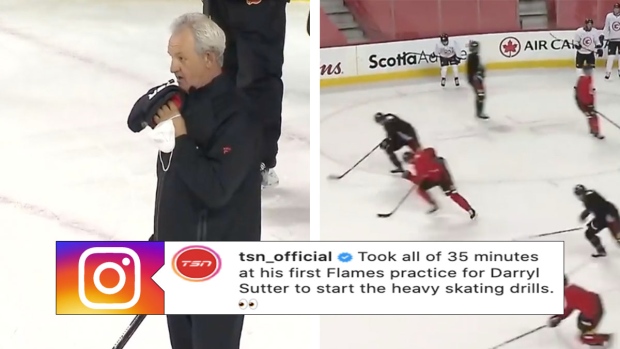 Coach Sutter is NOT here to mess around

It’s no secret that the Calgary Flames season hasn’t gone exactly according to plan.

They sit second to last in the North division standings, just two points ahead of the Ottawa Senators. In light of their struggles, the Flames parted ways with former head coach Geoff Ward last Thursday. Ryan Huska stepped in as bench boss for two games, both of which they lost, before his replacement arrived.

Sutter has joined the Flames for his second tenure as their head coach, and today was his first practice. He most definitely set the tone for the squad.

Just 35 minutes into his practice debut, Sutter had the skating drills roaring.

Definitely no messing around with the new guy, huh?

Calgary Flames reactions after their first practice with Darryl Sutter…

Chris Tanev:
"Definitely the best practice we've had in a while."

Matthew Tkachuk:
"All business, no messing around."

Sutter will make his debut behind the Flames bench on Thursday.