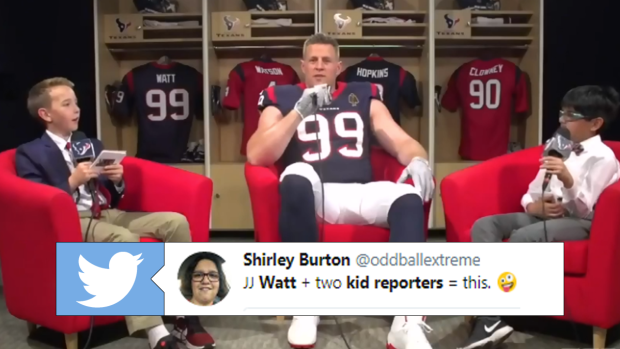 J.J. Watt – KNOWN terror on the field. Lesser known fact, he’s also a terror off the field (when dropped into particular circumstances).

A prime example is when he took down these nosey kid reporters, trying to ask the hard-hitting questions such as his “biggest fear”. Unfazed in the heat of the spotlights, a fully equipped J.J. Watt batted down their questions like it was a ball coming out of the QB’s hand.

Those kids didn’t stand a chance. He even managed to call the circumstance of being around them awkward.

In reality, Watt is one of the most likable players in the NFL. The talented defensive end has had trouble staying on the field, with multiple season ending injuries during his time in the league, but through four weeks this season Watt seems to be back to his terrorizing ways.

The kid reporters must be hoping he stays on the field and out of the hot seat. He would likely just wreck them again.