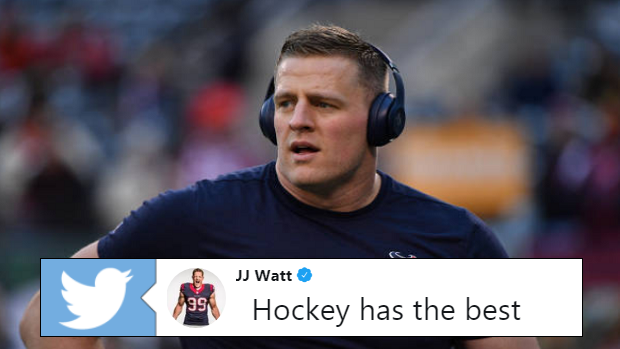 The three-time defensive player of the year has posted multiple videos of himself on the ice and last night ahead of Game 3 between the Stars and Blues, he continued to pump the sport’s tires. After the players entered the playing surface ahead of the national anthem, Watt made a bold statement that all hockey fans can get behind.

Hockey intros are great and all but there are definitely a few other sports that need to be considered. For starters, wrestling should definitely be in the conversation. If The Rock entering the ring doesn’t get you fired up then we’re not sure if you actually have a conscience.

And how can we not mention basketball? Think we can all agree that Kyle Lowry has the best pre-game tradition in the NBA.

Kyle Lowry’s introduction is still the best in the game 😂 pic.twitter.com/DapMQhqWO3

Alright, now let’s get back to hockey for a second. Skating through the star is definitely up there with the best traditions but if we had to be honest, the Sharks and Predators sit alone at the top. There’s something about skating through an animal’s mouth that just resonates with fans!

Regardless of which one you think is the best, it’s nice to see one of the biggest athletes in North America give some love to Canada’s most popular sport. Huge hockey guy that J.J. Watt guy is!