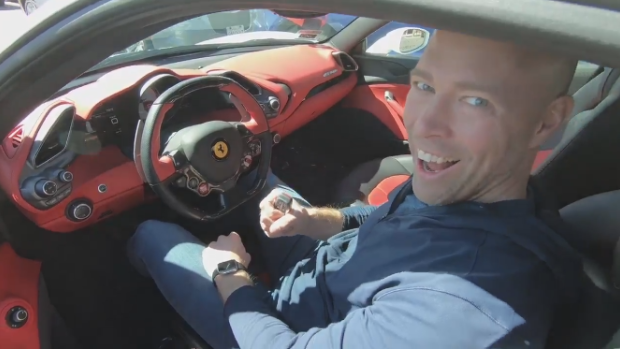 April Fools is a fun day in the sports world because it allows for teammates and team employees to pull pranks on each other.

J.S. Giguere is a former Anaheim Ducks goaltender that retired in 2014 with the Colorado Avalanche, but still holds with a close relationship with the team, including team captain Ryan Getzlaf.

Giguere was hanging out in SoCal recently, and on Sunday, the Ducks released an April Fools video of him stealing Getzlaf’s Ferrari, taking it for a spin, and then parking it away from Getzlaf’s parking spot.

We all know the Captain loves his car. Former #NHLDucks netminder J.S. Giguere – a noted prankster – decided to have a little fun during a recent practice. The result? A perfect #AprilFools prank! pic.twitter.com/2l9eVQWa2l

“I knew it was that pigeon.”

“Giggy” spent nine seasons in Anaheim, and said he needed to get Getlzaf back from something that stemmed from about ten years ago. A noted prankster, Getzlaf had a hunch that it was his old goaltender who was up to no good. It’s good to see the 2003 Conn Smythe winner is still in the loop with the club after all those years spent away from the organization.

There aren't too many professional sports organizations that put out fun and personable content than the Ducks do. Big ups to their social and digital team.