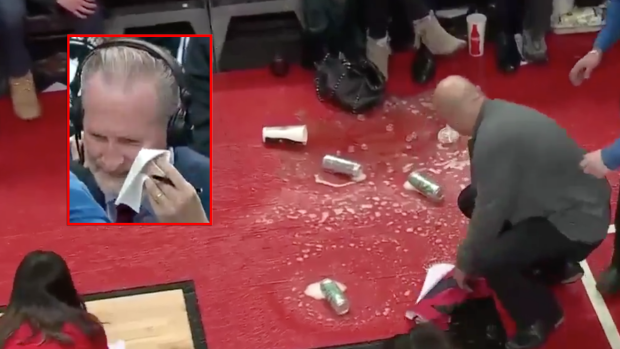 It was a big sports night in Toronto on Tuesday and the hottest ticket in town was for Game 2 of the Raptors and Wizards series.

As awesome as all of the action on the court was, though, one of the more lighthearted and entertaining moments happened because of a spilled drink.  During the game, someone sitting courtside spilled a drink on the floor and when Jack Armstrong noticed, he had the best reaction.

Jack Armstrong isn't taking all the spilled 🍻 on the @Raptors court all too well. #WeTheNorth #NBA pic.twitter.com/F9g6TadHeV

Spill any other drink in front of Jack, but not alcoholic beverages.

As good as Jack's reaction was, Leafs fans will like the reaction from this "fan" sitting courtside as the spill was cleaned up.

Brendan Shanahan approves of the job well done by the @Raptors clean up crew.#WeTheNorth #NBA pic.twitter.com/GzWou5UiY5

President of the Leafs on Monday night, Raptors fan on Tuesday night.  It doesn't get much better than that.