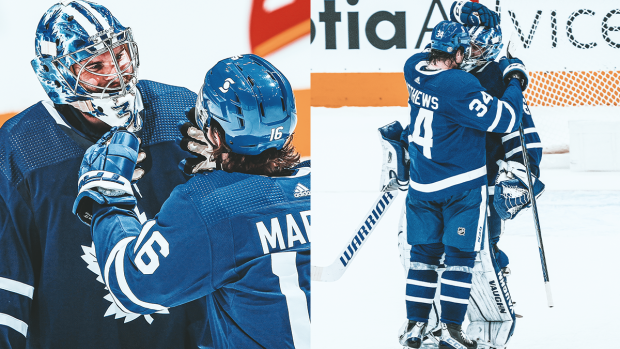 While Jack Campbell set the Toronto Maple Leafs franchise record with ten consecutive wins, it’s clear that the rest of the boys in blue were proud of his accomplishment.

Following the Leafs 3-2 win over the Montreal Canadians Wednesday evening, Campbell received all of the love as his teammates lined up to celebrate the moment with him on the ice after the game.

🎶 We gotta get right back to where we started from 🎶#LeafsForever #NextGenGame pic.twitter.com/N2nF55ilC8

With Campbell’s continuous positive energy becoming contagious with the rest of the team, the good feelings started pouring in as Auston Matthews congratulated the record-breaking goalie, expressing how proud of him he truly was.

Auston Matthews to Jack Campbell on the ice after setting new franchise record:

"I'm just so happy for him. He's such an amazing person and he brings a lot of joy in everybody's lives and in the locker room and I just couldn't be happier for him. He played unbelievable tonight. He's just such a special person."

We’re not sure who is cutting onions but we’re definitely getting a little teary-eyed at how sweet these two’s relationship is.

And the sweet moments don’t stop there!

Mitch Marner also joined in and showed all the love to Campbell as he counted with the goalie to ten before patting him on the mask.

Again, who is cutting onions?! We were not aware the Campbell soup had onions in it!

As quite literally the nicest guy within the league, he deserved all of the loving that was sent his way on his big night.

Way to go Soupy, you deserve it bud! Now keep on playing that Maxine Nightingale.