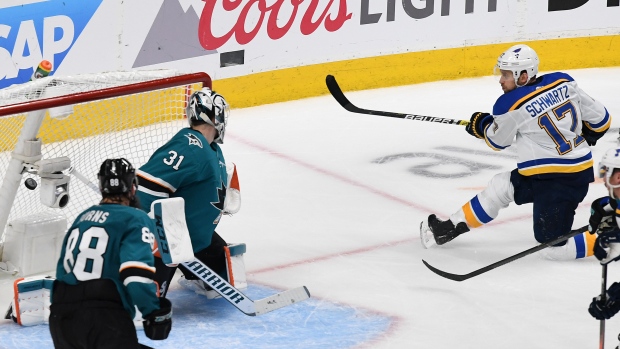 The St. Louis Blues are a win away from a berth to the Stanley Cup Final, and they probably couldn’t have gotten this far without the impressive goal-scoring tear that Jaden Schwartz has been on in these playoffs.

Through 18 games in the playoffs, Schwartz is already up to 12 goals, recording another hat trick in a dominant 5-0 win over the Sharks in Game 5. Impressively, this is his second hat trick of the postseason, making Schwartz the first player to accomplish that feat since Johan Franzen with the Red Wings back in 2008.

Schwartz’ first hat trick came in that memorable Game 7 win against the Winnipeg Jets in the first round, and he’s been rolling ever since. Considering he had all of 11 goals in the regular season (69 games played), Schwartz picked a good time to turn things around.

Oh, and for another notable historical tidbit, Schwartz seems on his way to pass the inimitable Brett Hull for the Blues’ single-season playoffs scoring record — although, there’s still something to be said for Hull’s ridiculous goal-per-game pace.

Jaden Schwartz now with 12 Goals in the Playoffs.

Passes Brett Hull for 2nd most and now is only 1 behind to tie Hull for the Blues franchise season record.#stlblues pic.twitter.com/l2nJZ4UYxL