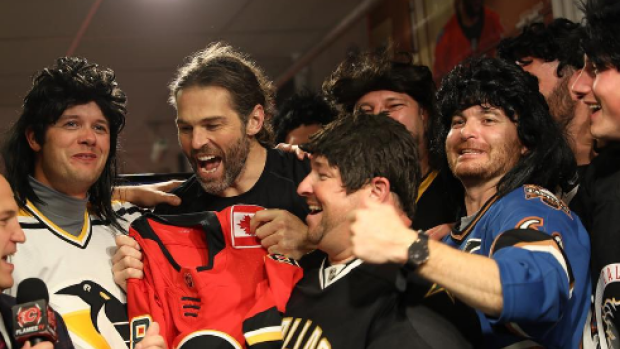 Christmas came super early for hockey fans in Calgary when the flames signed Jaromir Jagr to a one-year deal.

As soon as the 45-year-old legend confirmed that he would be returning for a 24th and potentially final season, we had so many questions. How many goals is he going to score to prove to all the GMs who passed on him wrong? Will he keep his signature mullet going? Does he still really have the moves (obviously)? And finally...is he going to have an encounter with the traveling Jagrs once they add another member to their squad.

We don't have an answer to those other questions as of this moment, but we definitely have one for that last question. Saturday, during the intermission of the Flames-Jets game, Flames TV interviewed the Traveling Jagrs. Since Jagr didn't dress for the game, he was creeping around the lower bowl of the Saddledome, allowing him to get the jump on the Traveling Jagrs, surprising them during their interview.

Just when you thought that Jagr couldn't get any cooler, he goes and does stuff like this. We're really hoping that this doesn't end up being Jagr's final year in the league, because he's clearly got enough shenanigans left in the tank to at least make it in the NHL until he turns 50.