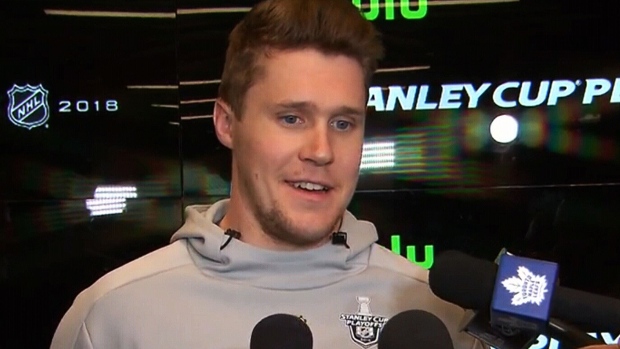 When the Maple Leafs were up 4-1 over the Boston Bruins on Saturday, fans couldn’t help themselves but think back to when the team blew a 4-1 lead to the Bruins in the 2013 Playoffs.

.@MapleLeafs fans knowing they have a 4-1 lead over the @NHLBruins in an elimination game. #TMLtalk pic.twitter.com/Zx44s9NEEX

Despite the Bruins' relentless pressure and the referees sending a parade of blue and white bodies to the penalty box, the Maple Leafs held on for a 4-3 win over the B’s.

They live another day... . #Leafs #TMLTalk

With the win, the Leafs forced a Game 6 that’ll go down Monday in Toronto. With the Leafs holding an optional skate on Sunday, some of the Leafs players spoke with the media about their big win. Once of those players was defenceman Jake Gardiner, who is just one of five players left from that playoff battle from five years ago.

When asked about the Bruins mounting another comeback of a similar fashion to the one in 2013, Gardiner was relieved to see his team held on for this win this time.

It’s interesting that Gardiner was unprompted and brought up 2013 by himself.

He was also the victim of a “phantom” call after he received a two-minute roughing call while trying to break up a fight. He also took a pretty good punch to the face from Zdeno Chara, which probably didn’t feel too good.

The refs were definetly a story in Game 5, and Gardiner offered up a pretty bang-on quote regarding the scuffle.

It's not like Chara came in and gave him a shot to face or anything, but hey at least we got this good quote from Gardiner.