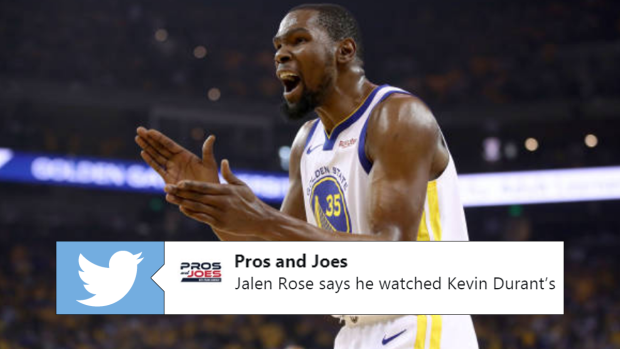 The Toronto Raptors and Golden State Warriors are now fully locked in battle. While many favoured the Warriors going into the series, they had a few things working against them. No factor stood in the way more than injuries.

While DeMarcus Cousins managed to return for Game 1 (on a limited basis), and Klay Thompson has staved off a serious injury to his hamstring (only missing one game thus far), the big story in Kevin Durant. While Steve Kerr and the Warriors are maintaining that a Durant return is fully possible, Jalen Rose thought otherwise after watching KD take practice.

Apparently he still looked pretty far away from a return.

Not what Warriors fans were hoping to hear, but Raps fans will certainly take it. With a 2-1 series lead heading into Game 4, an NBA Championship is only two wins away.

Durant on the shelf would certainly help those odds.