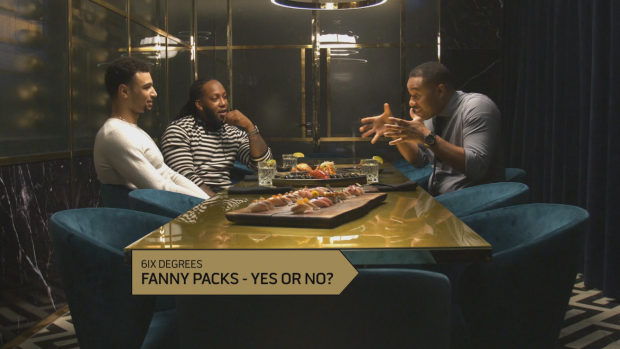 If you haven’t heard by now, Drake’s newest venture involves getting into the food scene. After conquering the music world, the 6ixGod, has launched a new restaurant in downtown Toronto called Pick6ix.

Pick6ix has teamed up with TSN’s Cabbie Richards and Much’s Tyrone Edwards to bring you exclusive content and interviews from the hottest athletes and celebrities that are steppin’ through the 6ix in new social media series called ‘6IX DEGREES.’

Recently, Toronto’s very own Jamal Murray rolled through the restaurant when the Denver Nuggets were in town. Part one of the interview looked at the best pre-game playlist, style and fashion that’s hot in the NBA right now, and the art of shooting a three-point shot.

Now, in part two, Murray is back to discuss another fashion product: fannypacks, and the difference between the bag and man purses. That’s not all that’s discussed, though. Cabbie and Tyrone go over the Fortnite craze that’s sweeping through the sports world right now, as well as Murray’s thoughts on the 2020 Olympics and what the Canadian roster could look like.

Sit back, crack open a beverage and check out the latest edition of 6IX DEGREES.

Watch out for the Canadian 2020 Olympics team! The talent is certainly there to make some noise.