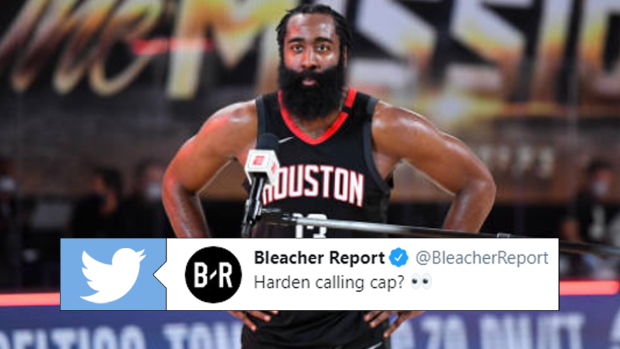 James Harden seems to be on his way out of Houston. After originally claiming to be fully committed to the Rockets, the allure of Kevin Durant, Kyrie Irving, and the Brooklyn Nets in the East is reportedly picking up steam. While we’re speaking of reports, Woj reported that Harden turns down a $50mil/year contract from the Rockets, which would CERTAINLY indicate he’s leaving.

Amid all the rumours, Harden has decided to make things even more murky.

It’s that time of year.

James Harden’s new instagram story minutes ago, which includes zooming in on a cap. Possibly: no cap. pic.twitter.com/3RGk8VGSOq

So now let’s analyze the video that begins as just a “capped” bottle. Harden appears to take the cap off the bottle, leaving the bottle with “no cap”, and then zooms in… on the “cap”.

Presuming he’s cryptically referring to all the rumours swirling around, he’s either saying there’s truth, or lies, being circulated. Perhaps both?

You can interpret it however you want, because we honestly just don’t know.

We’re really out here analyzing a water bottle in 2020

he's definitely saying the rumors are cap cuz he doesn't focus on the lack of cap on the bottle but instead zooms in on the bottle CAP itself. therefore, he is staying with houston yall heard it here first

but the emphasis on the cap could mean that its cap. I don’t know who to trust anymore

or he’s saying no cap?? pic.twitter.com/f01iAtb93A