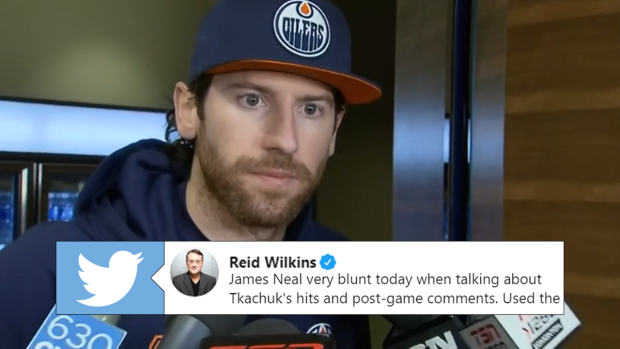 Matthew Tkachuk sure knows how to get under the skin of his opponents, and sometimes he does it in very questionable ways. One of those “blurry line” situations occurred when the Edmonton Oilers and Calgary Flames renewed their rivalry, and Tkachuk took multiple runs at Zack Kassian, popping the helmet off his head both times.

The hits were deemed legal by the NHL, although there’s been lots of fans, analysts, and players that have sounded off on the nature of the hits. You can see Tkachuk taking the runs from a distance, and Kassian is certainly in a more vulnerable position when he’s hit too.

Kassian was livid after the incident, earning himself a hearing with the NHL Department of Player Safety after dropping the mitts with a seemingly unwilling combatant in Tkachuk.

Right behind Kassian, teammate James Neal may be the most mad:

James Neal didn't hold back when asked about the Matthew #Tkachuk situation as the Battle of Alberta heats up. 😬

Former player Scottie Upshall seems to agree that the hit was not right, he gives his analysis here:

For those u haven’t played the game.... coming down from your WING (as a winger) to hit a vulnerable guy on a wraparound is as DIRTY as it gets. Such as BELOW. I know because I’ve done it, lots. I deserved a punch in the face too. If this hit was on McDavid, 10 GAMER MIN! https://t.co/wkg54VlZ40

Though lots are mad about the hit, others are saying it was fair and clean (and very, very hard). No matter what the right answer is, the Battle of Alberta is certainly alive and well.