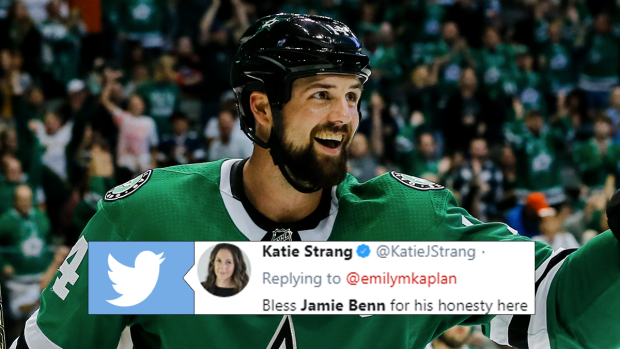 ESPN’s Emily Kaplan has a great series in which she asks a series of NHL stars the same questions and then puts together a roundtable article with some of the best answers. The latest, covers the “Vegas Flu”.

For the most part, players gave the answer that you might expect. Tyler Seguin, Jonathan Toews, Taylor Hall, Max Domi, Josh Manson, Anders Lee, Marc-Andre Fleury, Bo Horvat all basically said that it was real in opponent’s heads (Clearly making a joke about them needing an excuse), but one answer went against the grain. Jamie Benn, as he often does, gave everyone what they wanted when answering this question, a simple, sweet and honest answer:

I asked a bunch of NHL players how real the Vegas Flu was, to propose one NHL rule change and my personal favorite... financial advice they wish they knew as a rookie. https://t.co/B0wwT5doMx pic.twitter.com/B3Wh9LGEh8

Amazing. Vegas finished 29-10-2 at home last season, but that didn’t actually end up being the same dominant record they had started the year with (Which is where the Vegas Flu rumours started). For example, Minnesota, Winnipeg, Nashville, Tampa Bay, Pittsburgh, Boston and Toronto came away with equal or more points at home.

This year, they have a winning record at home, capturing five out of a possible eight points, and a losing record on the road.

Either way, it’s entirely possible that the flu was real for some teams and not for others. As for the Stars, they play the Golden Knights at home on December ninth, so fans of that team shouldn’t expect the best from their captain on that night.