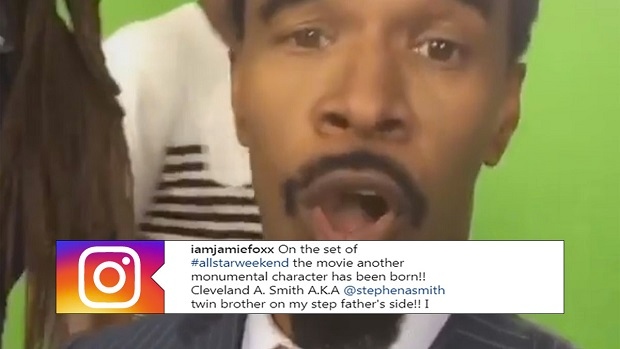 Jamie Foxx is known for a lot of things around Hollywood. The American actor, singer and comedian has won multiple awards over the years and he’s hoping his upcoming film will do the same.

He’s currently working on a movie called All-Star Weekend and it’s set to hit theatres next year. It focuses on two die hard basketball fans who do whatever it takes to get to the All-Star Game so they can see their favourite players LeBron James and Steph Curry in person.

On Wednesday, the Terrell, Texas native shared a teaser of one of the characters you might see in the movie. Known as Cleveland A. Smith, the character is supposed to be Stephen A. Smith’s twin brother, and Foxx does a fantastic job imitating the ESPN reporter.

Based off this clip alone we’re guessing the movie is going to be full of laughs, especially since he’s expected to be starring alongside Jeremy Piven. He’s also mentioned that the cameos in the movie are going to be epic, according to FightHype.com, and one of them might be retired boxer Floyd Mayweather.