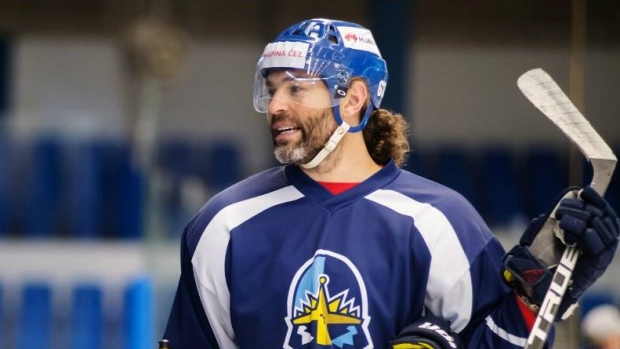 Jaromir Jagr continues to raise the bar on what’s possible as an athlete. The ageless wonder celebrated his 46th birthday in February, and many would have hung up the skates long before they reached that point, but Jagr isn’t just your average Joe. While he may not be able to produce quite as effectively in the NHL anymore, as shown by his brief and injury-filled stint with the Calgary Flames, Jagr’s intense workout regime, including a rumoured 1,000 squats per day, has kept his body younger than most entering their late 40s.

Any speculation that this year, the year that he was no longer sought after in the NHL, would be his last just took a backseat. The greyed and grizzled veteran signed a one-year deal with the Czech hockey club he owns, HC Kladno, and will be returning next season.

Jagr spent the last half of last season on loan to Kladno from the Calgary Flames and will be an NHL free agent on July 1st. pic.twitter.com/3zb3t8DEZ0

Jagr’s career looked to be in jeopardy when it came to a sudden halt courtesy of a huge illegal hit from behind. Many speculated that Jagr’s resulting concussion could be the final nail in what was a very injury-ridden year.

Legend Jaromir Jagr getting buried from behind. Left the game with a concussion. pic.twitter.com/Hr0DxmClac

HC Kladno forward Jaromir Jagr was injured after being taken down hard into the boards.

A stretcher was taken out, but Jagr eventually stood up and was helped off the ice by a trainer. pic.twitter.com/KTTETqO2lt

Jagr still remains an absolute legend in the Czech Republic, selling out games and even forcing some teams to relocate their matches to accommodate Jagr, so you can bet that Kladno was going to hop on any opportunity they got with Jagr. Besides, he owns the team anyway – selling out games is money straight in his pocket, all he has to do is lace up the old skates.

If Jagr plays for Kladno on Saturday (vs. Benatky) the game will be moved to Liberec with bigger arena. All Kladno's home & road games till the end of season will be sold out. #jagrmania