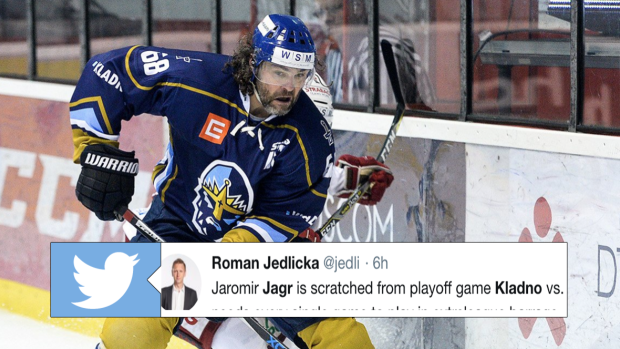 It looks like Jaromir Jagr's season is in jeopardy.

After being placed on waivers by the Flames and ultimately making his way back to Europe to play for his hometown team (Kladno), injuries have caught up to the future Hall of Famer.

Jaromir Jagr is scratched from playoff game Kladno vs. Prostejov though he needs every single game to play in extreleague barrage. Last games he played seven seconds after opening faceoff and then went to lockeroom. Well, what does it mean? Maybe end of season due to knee injury.

Jagr has been playing just seconds of games in order to stay eligible for the relegation games, as per Bernd Freimueller.

In order to stay eligible for the relegation games, Jaromir Jagr keeps on "playing" for Kladno despite a knee injury - seven seconds last night in first playoff-game vs. Prostejov (4:2)...

Jagr has been playing through the pain since he was with the Flames, but it doesn't seem like the 46-year-old can do that anymore based on the team scratching him in their latest game.

Furthermore, ISports.cz broke down what this means going forward:

The second most productive player in the history of the NHL missed the final two matches of the base, and to get the necessary number of starts to participate in the event, he jumped in the previous four duels with Prostějov for only a few seconds. If Kladno had the sixth match on the ice of the Hawks and managed to win the next four semifinal battles, Jagr could not get involved in the barrage, even if he hit all these matches.

Based on that breakdown and the fact that Jagr was scratched in his team's latest game, the rest of his season is clearly up in jeopardy, but we hope he can find a way to get healthy and play, or het healthy and come back next season.