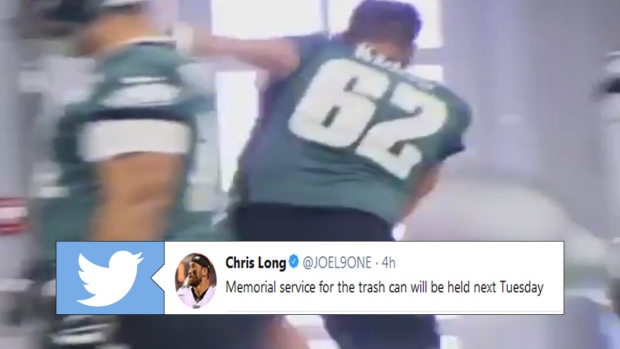 The Philadelphia Eagles have experienced their fair share of injuries this year, but the most recent season-ending injury suffered by Carson Wentz is easily the most devastating one they’ve had to deal with this season.

BREAKING: #CarsonWentz suffered a torn ACL against the #Rams and his season is over. . (📷: @sportscenter)

On Thursday, the Eagles held their routine practice as they prepare for Sunday’s tilt against the New York Giants and there was a brief moment where they thought they were going to need to add another player to their injury report.

#Eagles C #JasonKelce was fired up after getting hurt at practice today...

Eagles two-time Pro Bowl centre Jason Kelce was cleated in the shin during Thursday’s practice and ended up storming off the field in a great deal of pain. On his way off the field he ended up taking out his frustration on an innocent garbage can.

Memorial service for the trash can will be held next Tuesday https://t.co/rDjB65VQp2

Kelce spoke about the incident after the practice and used a work analogy to describe what happened.

"You hit your thumb with a hammer then throw the hammer halfway across the yard because of that," Kelce told the media during a post-practice scrum.

As for Kelce’s teammates, they had some fun at his expense on Twitter.

Will @iamcardib will be joining

The Eagles will try to keep their hot season rolling when they wrap up their three-game road trip against the Giants on Sunday.