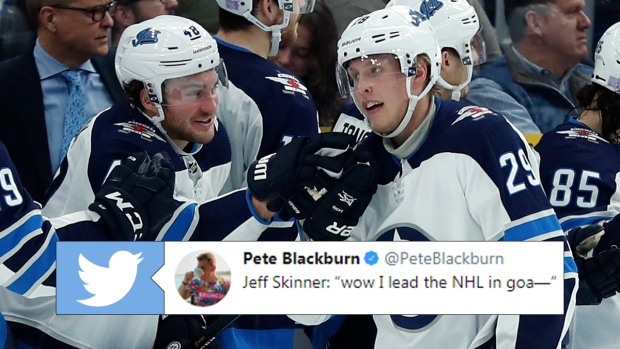 It was a slow start to the season for Winnipeg Jets winger Patrik Laine. The young Finnish star can now put any question of doubt in his goal scoring ability behind him.

The victims of his outpour were the St. Louis Blues, as the Jets piled on a 8-4 victory. Five of those tallies came off the stick of their young star. The hockey world reacted accordingly – utter astonishment.

Jeff Skinner: “wow I lead the NHL in goa—“

Laine is the 14th different player in NHL history and sixth in the League's modern era (1943-44) to score at least three hat tricks through his team's opening 22 GP of a season. #NHLStats #WPGvsSTL pic.twitter.com/OmWmjR8rfT

You think this guy was pumped about Laine's 5-goal game? 😅 pic.twitter.com/aLqJs6kYoh

Pasrnak: Oh, hey guys, didn't see ya up there.

Laine puts home his 5th goal of the game 😱 pic.twitter.com/oSTe6Ku1oh

Patrik Laine continues to make history scoring 5 tonight. He is the first player to score 5 in a game since Johan Franzen did it for the Red Wins in Ottawa on Feb 2nd 2011. @NHL @NHLJets pic.twitter.com/XFGfyTq5lF

Patrik Laine does it again, scoring his 5th goal for the @NHLJets vs the Blues tonight. With it, he becomes 3rd youngest player in NHL history to do so (20 years, 219 days old)

#NHLJets F Patrik Laine has 11 goals since Monday. Like, this past Monday. Like, 120 hours ago. That's a good season for many, many players. #wfp