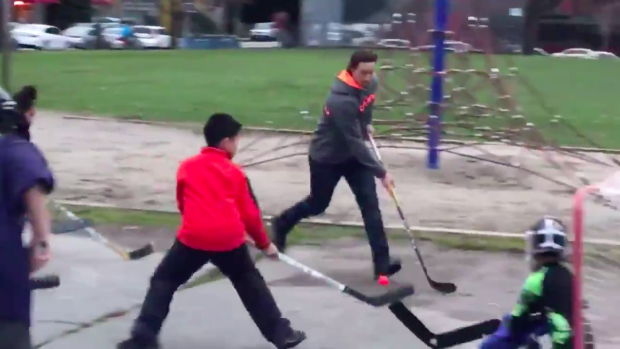 It’s great to see Jay Beagle involved with the local community, dropping in for some street hockey with a local kids’ group in Vancouver.

It’s even funnier when, after the team playing against Beagle allows a goal, one of the kids absolutely booms an obscenity off-camera. We’re not saying you have to strain your ears to pick this up or anything. Oh, no. It’s right there, and Beagle even glances backwards.

To be fair, a Stanley Cup champion drops in for street hockey, and you have the tough luck of playing on the other team? We get it. (Also, in this hypothetical, you’re like ten years old.)

We joke, but it’s always nice when NHLers take the time to make these visits. You really can see how much it means to the kids.

WOW! What a day 🙌 thank you @Canucks player Jay Beagle for coming to play hockey with the kids in our homework club Eastsiders program 🏒 we're blown away by your compassion! Thank you for showing these kids that they matter 😍 pic.twitter.com/nQNIyHmw8S

Amazing!! HUUUUGE thanks to the @Canucks and Jay Beagle for spending time playing street hockey with us in the Downtown Eastside today. Thanks for showing these kids how much they matter @ugm! Best line: “hey Jay, have you kissed the cup?” pic.twitter.com/gweSpNBUzl

As those fans back in Washington know, Beagle's a proper gem.