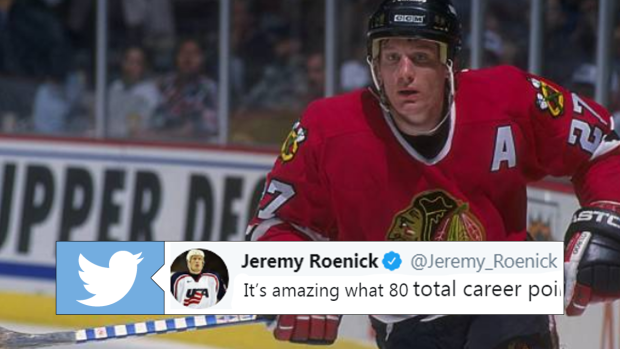 Jeremy Roenick certainly has never been shy to speak his mind, and that goes all the way back to his playing days. Now working for NBC Sports as an analyst, Roenick gets to use his voice even more than before.

He wasn’t on air when he ripped into today’s NHL, though. He took to Twitter for that, and he didn’t hold back.

NHL contracts today just blow my mind.... I remember when you actually had to earn high salaries, now they are just given and hope they work out! Crazy.

This Tweet comes on the heels of Thomas Chabot’s 8-year extension. The young defenceman got $8 million AAV, which isn’t bad for a blueliner entering his 3rd season. JR went on to bring up that particular contract, but it wasn’t the only massive signing for a young player.

Happy for Thomas Chabot on his new contract, as he’s a great kid with some serious skill. It’s amazing what 80 total career points gets you these days though... $64 million bucks over 8 years. Now we watch!

Roenick wasn’t the only one chirping. Former NHLer Matthew Barnaby chimed in, except it was JR in the crosshairs for this one…

Yeah difference is they pay now for future instead of past...