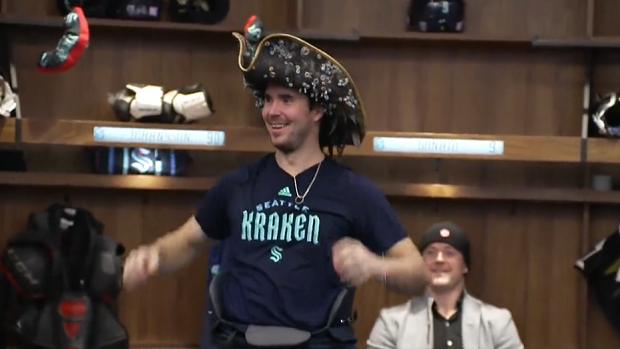 The Seattle Kraken haven’t even completed a full NHL season yet but they’re already in the running for having the coolest item for the player of the game.

Following the Kraken’s victory over the Carolina Hurricanes on Wednesday night, the players got quite the surprise after the game as they got an incredible upgrade to the pirate hat they were using up to that point, courtesy of Kraken investor and producer Jerry Bruckheimer.

After seeing the players use a pirate hat, #SeaKraken investor Jerry Bruckheimer decided to create a one-of-a-kind surprise for the team’s Player of the Game award.

Introducing from the depths to the sea - the Davy Jones Hat. pic.twitter.com/KcjH46OLao

Bruckheimer, known for films such as Top Gun and Beverly Hills Cop as well as the Bad Boys and Pirates of the Caribbean franchises, surprised the players with a video message and topped it off with the Davy Jones Hat, which will now be used as the Player of the Game award.

It's going to be hard for any team to top this.