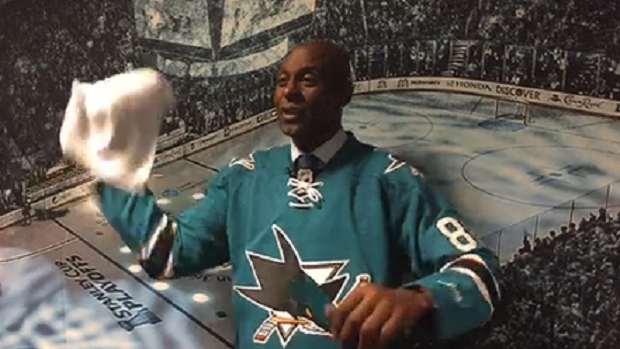 When the San Jose Sharks have a celebrity in attendance, they commonly get the guest of honour to open the locker room door pre-game to get the festivities started, let the Sharks out, and pump up the fans before the team takes to the ice.

Before Game 4 of the Stanley Cup Playoff series between the Sharks and Edmonton Oilers, a familiar face for football fans was the celebrity opening the locker room doors. NFL Hall of Famer Jerry Rice!

It's no coincidence the Sharks scored a touchdown's worth of goals on the same night Jerry Rice opened the locker!

Had to to score a TD with @JerryRice in the Tank tonight. #WreckTheRig pic.twitter.com/bXgSV2eBiV

Before Game 3 of the series, Baseball Hall of Famer Rickey Henderson had the honour of opening the doors for the Sharks:

The Sharks lost Game 3, but it looks like Henderson had a blast both opening the locker, and meeting the Sharks mascot Sharkie, who happened to be dressed up as a rabbit for the Easter holiday.

A shark dressed as a rabbit and a guy that can outrun a rabbit! #RickeyHenderson. Thanks for sharing @stomper00 pic.twitter.com/vD0jkxoJGc