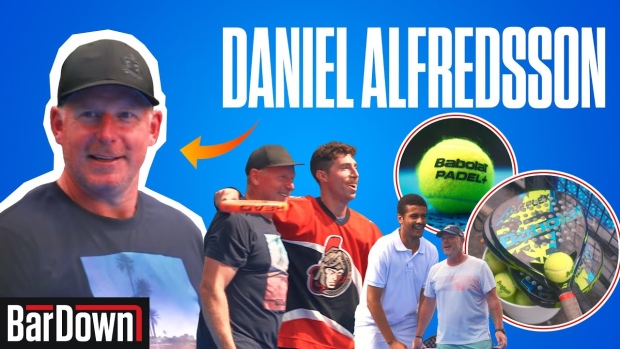 It’s been a great year for Daniel Alfredsson as he was named to the Hockey Hall of Fame. While Alfredsson’s on-ice legacy is set to be enshrined forever, he’s also establishing a legacy in a different sport. A sport you may not have heard of, in fact!

Padel, simply put, is like a mixture of tennis and squash. You play on a court that is essentially a small tennis court with walls, and you use a ball that isn’t quite as lively (bouncy) as a tennis ball.

Daniel and his brother Henric are huge ambassadors of the sport, and they decided to bring a court to Ottawa. Jesse and DZ made the trip to Ottawa recently to learn about the sport and play a couple games. There was… uh… a noticeable skill difference between the Alfredsson brothers and the newcomers.

You already knew Jesse would be dressing up for the occasion, but the fake muzzy was definitely a nice touch. The muzzy did only score a 6 out of 10 on Alfie’s rankings, but you could make the argument that Jesse’s muzzy performance outdid his Padel performance.

In case you were wondering, this is what professional Padel looks like:

Can we get more Padel courts around Canada?