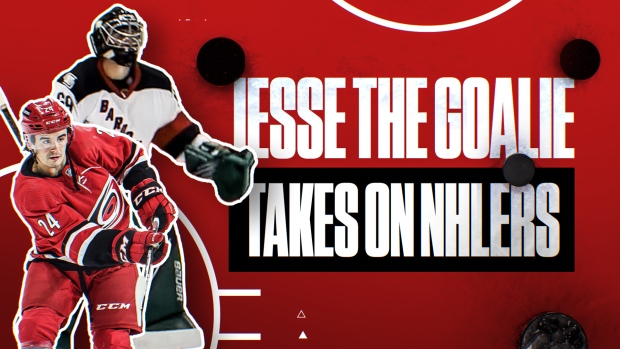 If you’ve been following BarDown for a while, you’ve likely seen a handful of video of Jesse Pollock playing hockey. He’s the one with blue skates and the number 69 slapped across his back, and he’s probably playing with no pants on or something.

Recently, Jesse traded in the twig and picked up goalie stick to take some breakaways. His competition wasn’t exactly the ASHL level he’s used to facing, either!

Seth Jarvis, who played 68 games with the Carolina Hurricanes in his rookie season, joined Jesse on the ice along with 74-game NHLer currently in Nashville’s system Cody Glass, and Pittsburgh Penguins 1st round draft pick Owen Pickering.

It should be noted that Jesse is battling an ankle injury at the moment, but it’s still not a great showing from the Winnipeg Jets super fan. He was consistently getting undressed by Jarvis, Glass, and Pickering.

While Jesse hasn’t suited up as a hockey goalie before, it’s not his first time minding a net. Back in December, Jesse strapped on goalie pads to take on some professional lacrosse players!

It’s also not his first time on the ice with professional hockey players. He also took the ice to hold a skills competition with some of the NHL’s top prospects!