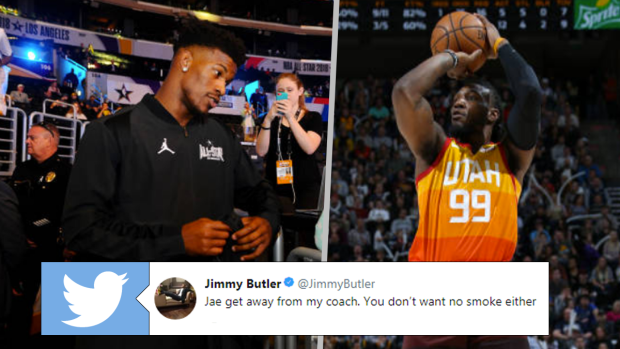 Is it just us, or has basketball been chippier this year than in most of the recent past? Traditionalists will scoff and explain how the game is nothing like what it was near the end of the century, and while that may be true it is hard to argue that this year hasn’t been a little more intense than most seasons of the modern era.

It seems like every other night players are channeling their inner hockey player as they skirmish, chirp, and even occasionally throw punches.

Aaron Afflalo threw a nasty punch at Bjelica, who put him in a headlock to stop it right there pic.twitter.com/0zAKOb3r1v

On Friday, the league saw another altercation take place after Jeff Teague got himself ejected for appearing to lower his shoulder and throw his body into Jazz guard Ricky Rubio. The impact sent Rubio tumbling to the ground, right around the knees and feet of courtside onlookers, prompting the Spanish guard to stand up quickly and aggressively. Meanwhile the rest of the game’s participants gathered to give each other their two cents on the matter.

As is often the case with on-court incidents, the conflict didn’t end there. Jimmy Butler, who is currently nursing an injury and was not involved in Friday’s game, took to Twitter to give his thoughts on Teague’s body check, dropping a few names in the process.

haven’t used Twitter in years. But yeah Jeff that’s what I like to see. Rubio getting up quick for no reason.

Jae get away from my coach. You don’t want no smoke either

But he isn’t a better player or coach than anybody that you just named...

While some would think that Rubio would be the one most likely to respond, seeing as he was at the receiving end of the contact, as well as his six-year tenure as a part of what is now Butler’s Timberwolves, it was the former Celtic and Cavalier that stepped up to the plate.

I DONT TWITTER BEEF ILL LEAVE THAT TO U.. BUT U GOT MY PHONE NUMBER AND KNOW MY HOME ADDRESS..!! THE REST CAN BE HISTORY 😈😈 https://t.co/FGDRYnYyg5

It doesn’t outright say what Crowder is eluding to (who knows, maybe he just wants to meet and talk things through over a glass of wine?), but one can only guess it’s the Twitter equivalent of “meet me outside, punk”.