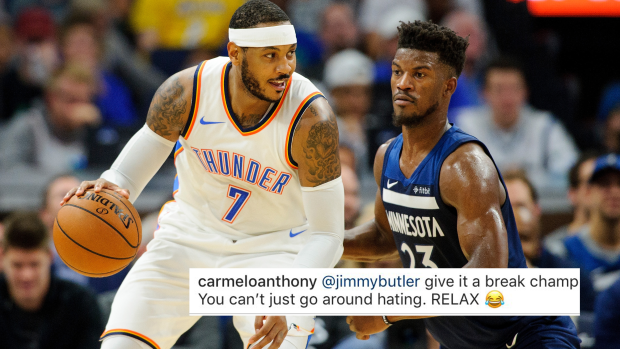 Carmelo Anthony may not have a ring in the NBA, but he did win an NCAA title with Syracuse back in 2003. That may not seem like a very long time ago to most, but to Jimmy Butler, it might as well be a lifetime ago.

Wednesday, the Syracuse Orange faced the ASU Sun Devils in a play-in game to see who would get to go to the big dance. Melo, being the proud Syracuse alumnus that he is, shared a graphic of the final score after the Orange's win to show some support.

Butler, who has had a few social media run-ins this month, sensed an opportunity to chirp Melo, and he most certainly took it, commenting below the image.

The jab was clearly a joke from Butler, but he seems to be developing a bit of a reputation as one of the NBA's premiere trash talkers online. Although, while he way be challenging for the title, Joel Embiid clearly still sits upon the throne.

The GOAT in front of Joel hyping up the crowd #BurnerAccount #TheProcess pic.twitter.com/DWPB6KI4CJ