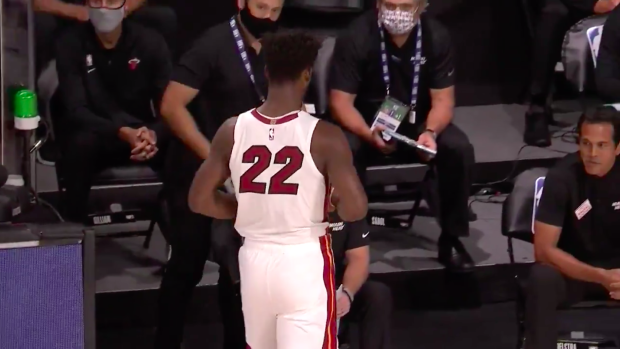 While NBA players had the option of choosing from a list of league-approved social justice messages to replace their name on the back of their jerseys, Jimmy Butler wanted to wear a blank jersey to express his support with the Black Lives Matter movement.

“If I wasn't who I was today, I'm no different than anybody else of colour. I want that to be my message in the sense that just because I'm an NBA player, everyone has the same rights, no matter what,” Butler told reporters in July.

On Saturday, during the Miami Heat’s first regular season game in the bubble, Butler tried to start the game with a blank jersey, but was made to switch it out before tip-off by the referees.

Jimmy Butler tried to wear a jersey with no name in support of Black Lives Matter. . (🎥: @miamiheat)

From the smile on his face, it seems like Butler knew this was how his attempt to wear a blank jersey was going to play out, but the statemade is made. His jersey will just have his last name, joining other stars including LeBron James who have chosen against wearing the NBA’s messages.

Jimmy Butler says he won’t wear anything on the back of his jersey. Not even his name. Wants it blank as his own social justice message. He feels like it represents who he would be if he weren’t a basketball player. pic.twitter.com/2I4vJUpL7x