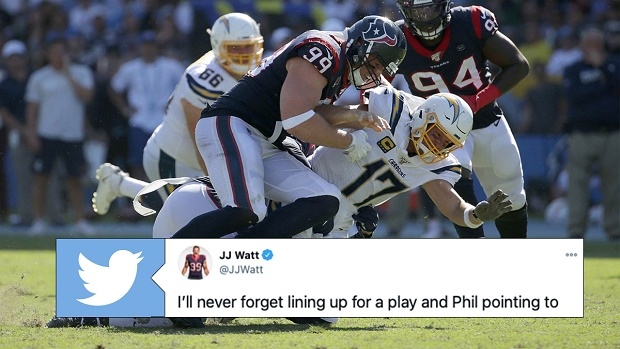 After 17 NFL seasons, Philip Rivers is calling it a career.

The 38-year-old spent his entire career in the AFC so he saw some players more than others. One of those guys is Houston Texans defensive end JJ Watt, who shared a pretty great memory of Chargers in his retirement message to the 8-time Pro Bowler.

I’ll never forget lining up for a play and Phil pointing to one of our linebackers and telling him he was lined up wrong based off the blitz we were about to run and being 100% correct about it haha.

One of the smartest I’ve ever played against and a hell of a competitor. https://t.co/1AZxyvDafu

Stories like these are always great and they’re even better when they’re caught on video through NFL Films. Since Rivers is someone who avoids cursing at all times, Watt made sure to  make a quick edit to his tweet, just for him.

There are people who wouldn’t consider Rivers to be a Hall of Famer, but he retires 5th all-time in passing yards (63,440) and is one of just seven quarterbacks to throw for 60,000 yards or more during their career. He also sits 5th all-time in touchdown passes (421) and has the 12th best passer rating of all-time (95.2). Sure, Rivers doesn’t have a Super Bowl to his name, but he’s still worthy of the Hall of Fame.