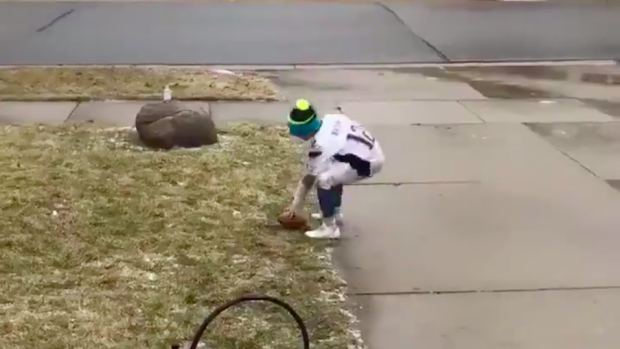 If you’re missing sports and the dulcet tones of Joe Buck’s commentary on your TV, don’t worry, because Joe Buck is BACK.

After putting out the call to his 241.3K followers on Twitter for videos from their daily lives during self-isolation, Buck has begun reposting them with his own play-by-play of the video dubbed over.

So far, he’s posted four such videos, although we’re sure there’s more to come over the rest of the day as well as the next little while — he says on Twitter that he’s already recorded at least 12.

Here we go...first up is @minakimes and a half-eaten football. Please reply and tag with the charity that you are donating to!!! More to come! pic.twitter.com/q8BuYuutbr

This one might make @patriots fans a bit sad…although Brady wishes he had these moves. @Brogan1197 tag your charity and take care of those boys, I might be seeing them on a Sunday one day! pic.twitter.com/bROi7PPwDE

I have a feeling @letitflytom has won his fair share of drinks with skills like this. @PatrickMahomes would be proud. Let us know who you are donating to @letiflytom #bluesbrothers 🎯 pic.twitter.com/WyrkK0hPB6

Watch out Breen...if @foxsports ever gets @NBA, I'm getting ready. @AdamHoge, tag a charity and then maybe order your kid a present to make him feel better after this one 🏀. pic.twitter.com/WJMGnrmBsa

In exchange for their video getting the Joe Buck treatment, Buck is encouraging his followers to donate to a charity of their choice.

This is the wholesome, sports-adjacent content we need in our lives right now.