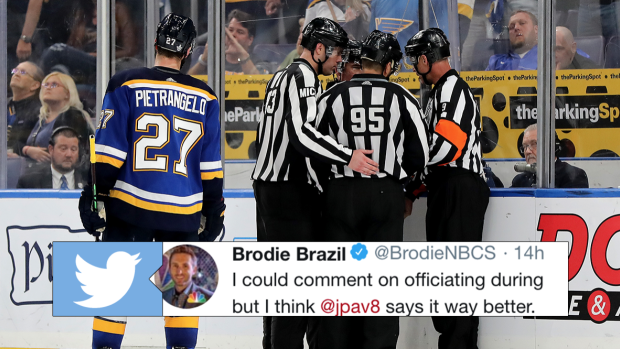 We've heard the reaction from the Blues players, coaching staff, and management about the non-call on the hand pass that went against them in overtime which led to the Sharks' win.  If you haven't, they were very upset (and rightly so).

What about the reaction from the Sharks, though?  When a call that's so obvious goes for your team, the reaction is very different and after the Game 3 win, captain Joe Pavelski summed up his take on the officiating in general.

I could comment on officiating during these ENTIRE #StanleyCup playoffs — but I think @jpav8 says it way better. pic.twitter.com/pbIFnrVYUJ

Referees are by no means perfect.  They're going to miss calls and it's unfortunate when they miss what many think is an obvious call in such an important moment.

It's important to remember, though, that they're not trying to "screw" any team over like Pavelski said and that they are human.  The refs are the last people that wanted such a great game to end in controversy.

Sadly for the sport of hockey, this missed call will be added to the long list from this postseason and it will have many wanting a change to reviews and challenges in order to get the calls right.