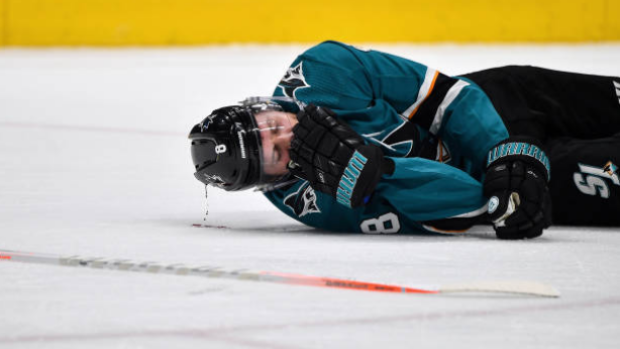 Missing one of their most important players, the San Jose Sharks put up a spirited effort thanks in part to a spirited appearance from their captain.

Nursing a 2-1 lead in the third period, Joe Pavelski was shown on the jumbotron and broadcast with a rally towel in hand while wearing a suit, firing up the fans inside the Shark Tank during Game 5.

Joe Pavelski comes out in a suit to fire up the San Jose crowd pic.twitter.com/3vhKk86Kx7

On Sunday, Pavelski informed reporters that he suffered concussion-like symptoms and needed staples to stop the bleeding from a pressure cut following his Game 7 injury against the Golden Knights.

When asked specifically about the collision with Cody Eakin and Paul Stastny that caused him to spin awkwardly and hit his head on the ice following a face-off, Pavelski agreed with the majority of the hockey world that it shouldn't have been a five-minute major.

Pavelski admits it wasn't a major penalty: "I played against those guys for a lot of years. Friends with [Stastny]. I got no issues with that play. Was it a 5-minute major? No. I don't think it was. Am I glad they called it they way? Heck yeah."

Pavelski's full thoughts on major penalty, challenge for the refs & a complicated, emotional night: "One of tougher nights and one of the better nights at the same time."#SJSharks #VegasBorn pic.twitter.com/aeL6g6nJVG

The Sharks went on to score four straight goals on the major in one of the most memorable and craziest moments in playoff hockey history. San Jose won the game in overtime after the Golden Knights managed to tie it up, and now hold a 3-2 series lead over the Avs.

Pavelski will travel to Colorado with for Monday's Game 6, but no timeline has been given on when he'll actually draw back into the lineup.

In seven games this post-season, the 34-year-old has amassed two goals and two assists.

Joe Pavelski showing why he's the #SJSharks emotional leader. His feeling after going down in Game 7: "For me, there was a cool, calming sense that I was going to get a chance to hopefully recover and get another chance to play still." pic.twitter.com/qI8OsDuibD