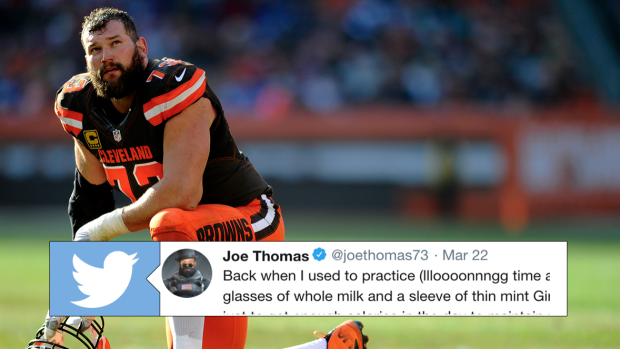 Ever wanted to know what the real-life diet of an NFL lineman is like? Well, here comes 10-time Pro Bowler and freshly retired professional big boy Joe Thomas, who played eleven NFL seasons as the Cleveland Browns’ offensive tackle, to satisfy your curiosity:

4200 calories to maintain my weight on inactive days https://t.co/J5p9m2wShD

The Government of Canada recommends 2,700 calories for a male in the 19-30 age range with an average physical lifestyle, and frankly, that’s hard enough to hit already, so how Thomas could hit the 4,200 mark on inactive days is beyond the imagination. (Does that mean he eats even more on active days to make up for calories burned? Is the man breaking 5,000?)

Of course, playing as an NFL lineman in the modern age comes with specific requirements. According to NFL.com, Thomas’ listed weight in his final season was 312 lbs, and he’s played heavier before:

You have to be heavy to play NFL OL. If you played at 260 like they did in the 80s, you’d be mashed into pieces https://t.co/e64UFnssyR

Fairly interesting stuff, but that’s enough of that. Let’s get to the hard-hitting journalism: What kind of eating habits gets a man over 4,000 calories in a day?

Back when I used to practice (llloooonnngg time ago😂) I used to drink 2 big glasses of whole milk and a sleeve of thin mint Girl Scout cookies before bed just to get enough calories in the day to maintain weight. https://t.co/KGqLeARGWH

Tip for guys trying to gain weight for football. When I was in HS, I would take an entire loaf of bread, make it all into PBJ sandwiches. Then I’d eat 1/2 a sandwich every hour and wash it down with a glass of whole milk. Guaranteed weight gain.

Hey. That doesn’t sound so hard! PBJ sandwiches, whole milk and Girl Scout cookies. One might even find that an average human being looking to gain weight could incorporate this into their own diet! None of this business about eating gluten-free or, like, kale.

There’s no doubt that these eating habits worked for Thomas, who holds the NFL’s iron man streak of 10,363 consecutive snaps played -- a streak only ended in his final season, at the age of 32.

Oh, and you better believe that Thomas had some Girl Scout cookies takes to fire off, too.

Girl Scout S’mores are really getting a raw deal here, if you were to ask an unbiased party.