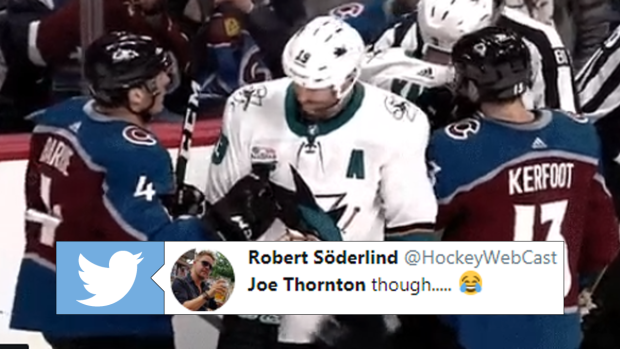 Joe Thornton is one of five NHL players to have debuted in the 90’s and still be playing, along with Zdeno Chara, Roberto Luongo, Matt Cullen, and former teammate Patrick Marleau. In that time, he’s played a whopping 1,526 games split between the Boston Bruins (1997-2005) and the San Jose Sharks (2005-Present).

During Wednesday’s game between the Sharks and the Colorado Avalanche, Jumbo Joe flashed a little bit of that respect when he had absolutely no problem casually dealing with Tyson Barrie during a scrum.

He may as well have said “Young Buck, I’m going to need you to get your hand off me.” You almost never see an opposing player that compliant during a scrum, but you weren’t going to see the 27-year-old Barrie face-washing the NHL 2nd highest active games played leader (Thornton’s 1,526 trails leader Patrick Marleau’s 1,614).

Don’t get this confused though, Thornton certainly isn’t afraid to throw down when he wants to…

Tyson Barrie is a good 9 inches taller than me and he still looks tiny. It's insane to think Joe Thornton and I are the same species. https://t.co/0IlqKzSPnX