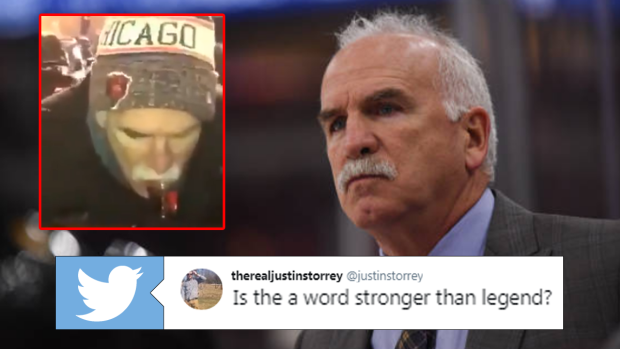 Joel Quenneville is widely thought of as one of the best coaches around. It surprised many to see him axed from the Chicago Blackhawks organization following a bad start to the season.

Coach Q was in his 11th season with the ‘Hawks when he was dismissed, in which time three of his 10 completed seasons resulted in Stanley Cups. Last season was the first season he missed playoffs as Chicago’s bench boss.

No matter what side of the coin you fall on, one thing is for sure – Quenneville is still beloved in Chicago. That was confirmed when he was seen properly tailgating at the Bears Sunday Night Football game.

Joel Quenneville seems to be enjoying his break from coaching 😅 #repost @bardown ••• (🎥: Twitter/B_Woulfe91)

Love it! Nice to see that Quenneville is still supporting Chicago sports even after being terminated by the ‘Hawks. He’ll always have a special place in the hearts of Chi-Town residents.

Gettin it in now, cuz he knows it'll be Kale juice shots in Seattle.

Is the a word stronger than legend?