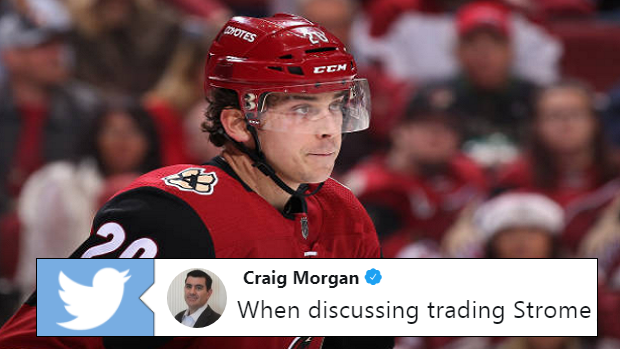 The Arizona Coyotes and Chicago Blackhawks rocked the hockey world last night after striking a deal involving three former first round picks. The ‘Yotes sent 2015 3rd overall pick Dylan Strome and 2014 12th overall pick Brendan Perlini to the Hawks in exchange for 2014 20th overall pick Nick Schmaltz. Arizona has missed the playoffs in five straight seasons and it appears general manager John Chayka’s patience started to run thin with trying to develop his two blue-chip prospects. At least that’s what he insinuated while discussing the trade.

When discussing trading Strome and Perlini, Coyotes GM John Chayka said there is a difference between patience and hope. The latter is not a way to build your organization.

Tell us how ya really feel, John.

Chayka’s latest deal is just one of many that have been struck by the 29-year-old GM. Just this summer he sent Max Domi to Arizona in exchange for Alex Galchenyuk. He’s also acquired players such as defenceman Hjalmarsson, forward Dereck Stepan and goaltender Anti Raanta.

Coyotes and Blackhawks make a deal

From Chicago’s side, Schmaltz becomes just the next first round victim to get traded from the organization. Things haven’t looked great for them since 2011…

The cupboard is pretty bare.

If Strome lives up to his third overall potential, Chayka could be having nightmares about this one for a long, long time.