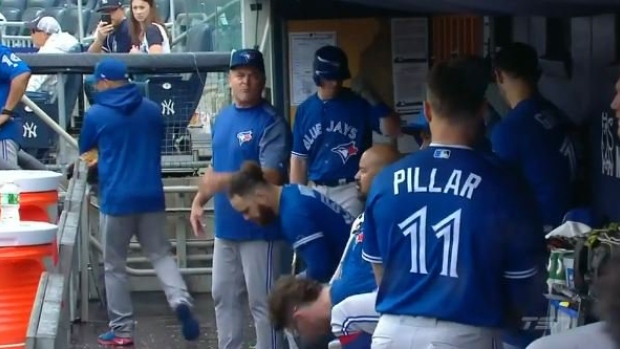 It’s been a long season for the Toronto Blue Jays, and on Sunday afternoon, manager John Gibbons appeared to have reached his tipping point.

In the sixth inning with the Jays trailing the New York Yankees 6-2, Kevin Pillar decided to take it upon himself and try to steal third base with two outs. Pillar was caught dead like a fish out of water on a throw from Yankees catcher Kyle Higashioka.

As Pillar jogged back to the dugout, he received an earful from manager John Gibbons, who was not overly thrilled with Pillar’s sloppy baserunning.

Here's the video of Gibbons giving Pillar an earful in the dugout, plus video of his ejection a few minutes later: https://t.co/daq2w7m1oi #BlueJays

Following the game, Gibbons spoke to reporters about the incident and why he was irked by the blunder.

“You’re down. He knows it. [But] it’s tough to criticize Kevin because of the way he plays the game. He does everything right. He sacrifices his body and all of that. But every now and then we lock up mentally, I guess. He knows that. That’s part of it.”

With the amount of youth in the Jays clubhouse, Pillar and the Jays need to set an example on how to play the game the right way and not make sloppy habits seep into a group that is already prone to making mistakes out in the field. Pillar had good intentions, but knows can't be making such bonehead plays on the basepath.

“The way the game was going, it was rainy, it was wet out there, I was trying to do something that probably rarely ever happens, getting him [Yankees catcher to throw the ball away, try to score a cheap run, try to get us back in the game. But I’ve got to trust the guys behind me to drive me in, which they’ve been doing a good job of,” Pillar said.

This happens more often than the cameras catch it, as tensions between a player and a coach can rise, especially in a season like the Jays are experiencing. The Jays lost by a final score of 10-2 for their fourth straight defeat. Former Jay J.A. Happ got his fourth straight win in as many starts since being acquired by the Yankees.

Up next, Gibbons and the Jays welcome the dreadful Baltimore Orioles, who sit a whopping 50 games under .500 with a 37-87 record, to town for a three-game set.