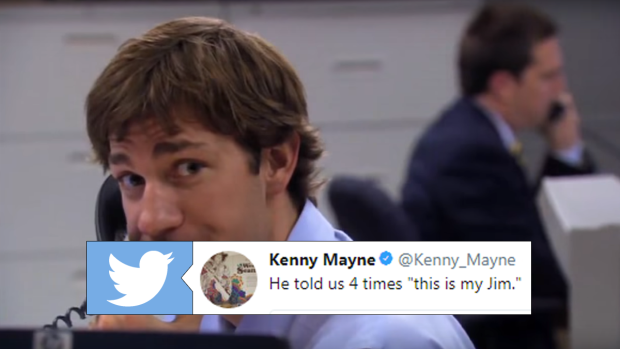 John Krasinski will always be associated with one character in his career, because Jim Halpert is so loved by fans of The Office.

Fans love him for his pranks, jokes, relationship with Dwight and so much more, but the thing he might be most famous for is staring at the camera when another person in the office does something unbelievable. There are supercuts of his camera glances all over YouTube, but now it appears that Aaron Rodgers is biting his bit.

Ha! Nice try @AaronRodgers12 not even close! I mean just look at the way your smile doesn’t even—or the fact that your eyes aren’t—oh my god... he’s nailing it. https://t.co/WU9la26lhb

We spent most of our Human Interest# story shoot watching @AaronRodgers12 drop Jim from The Office glances. pic.twitter.com/KG6FwKbQ7h

He told us 4 times "this is my Jim." https://t.co/JiTVMBKuBN

Rodgers actually made a cameo on The Office at one point, so maybe he picked up a pointer or two from Krasinski while he was on set.

Luckily for Krasinsky, the show has ended by this point, so Rodgers doesn’t have an opportunity to take his job.