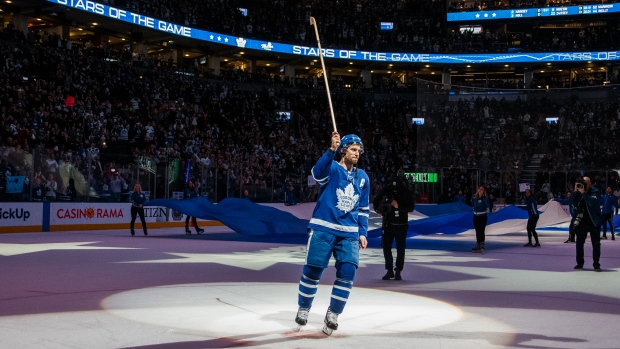 The last few days have been quite the whirlwind for John Tavares. From getting plastic snakes and his own jerseys thrown him in Long Island to Leafs fans rallying with the #TavaresDayTO hashtag on Twitter to his own team announcing him last during player introductions for a massive ovation, it’s been a doozy.

After the Leafs rebounded from their loss to the Islanders with a win against the Sabres on Saturday, Tavares expressed gratitude to the fans, while his teammates offered their own support to Tavares.

#JohnTavares gave thanks for the support he felt from #MapleLeafs fans 👏

Tavares said he doesn't know who among #Leafs decided he'd be left alone at blueline as crowd cheered before game, but "To give me a moment like that, it’s certainly something I’ll always remember and just shows how tight we are in here and I really appreciated it."

John Tavares on how his teammates felt bad for letting him down in NY:

"Well, we win & lose as a team. Myself, I don't think I played very well. As a team, we wanted to respond ... it was a good team effort on the win tonight, a good way to bounce back."

"All the stuff that you could hear, it doesn't matter how strong-willed you are, it's going to affect you one way or the other. That's why it was so special coming back home & giving him that love he deserves."

Babcock on the Tavares ovation: "It was great, but I also thought the people in New York showed the passion they have for John the other night too ... when you get booed on the road, you must be something special. That's the way I look at that."

With so much love in the crowd for Tavares tonight, it was obviously a meaningful one after his last time out. The love and the hate are both just a part of the game, but it’s certainly always nice to know that somebody out there has your back.