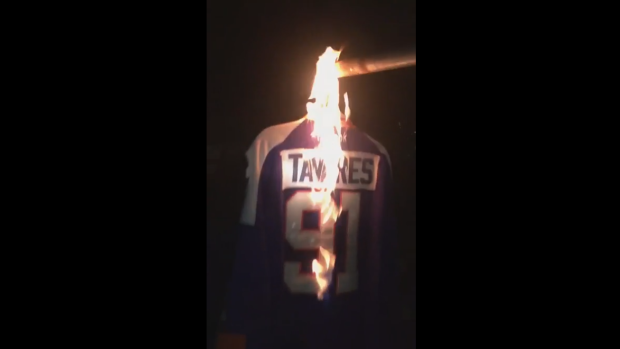 Today's the day! What player do you hope your team signs today?

The biggest fish out on the market is unequivocally is John Tavares. The 28-year-old centre left an extra eighth year on the table by choosing to not sign with the Islanders by the first of July.

Most Islanders fans understand that if he’s made it this far already, returning to New York on a seven-year contract seems unlikely at this point, although with Lou Lamoriello now in the picture, it would be foolish to fully count them out.

However, one Islanders “fan” has come to the conclusion that Tavares is done as an Islander. Just like when LeBron James left Cleveland for the first time (see what we did there), this one particular guy decided to soak a counterfeit Tavares Islanders with lighter fluid and then proceeded to light it on fire.

Imagine if Tavares does, in fact, return to Long Island just to make this guy look silly.

HOW DARE YOU @91Tavares

AFTER ALL THIS FRANCHISE HAS DONE FOR YOU

AFTER ALL THIS FANBASE HAS DONE FOR YOU