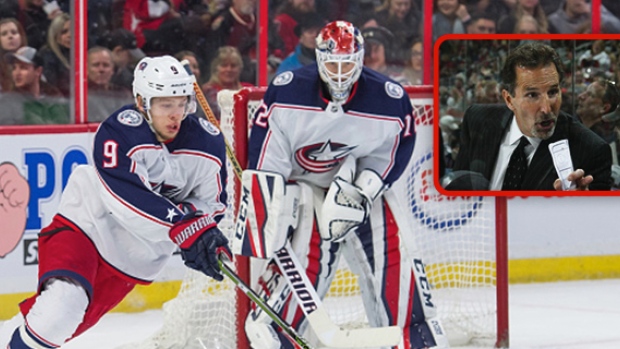 The Columbus Blue Jackets could have a drastically different look in a year from now when they start the 2019-20 season.

With just a year each remaining on the contracts of Sergei Bobrovsky and Artemi Panarin before the two Russians hit unrestricted free agency, the clock is ticking on the team to reach an extension with both of them before the 2018-19 season gets underway.

Generally speaking, players don’t want to be a distraction in the dressing room and have to worry about their contract during a season, as they'd rather have a deal done ahead of time, similar to how the Los Angeles Kings signed defenceman Drew Doughty to an eight-year, $88 million extension on July 1st a year ahead of Doughty potentially hitting the open market.

With training camps set to get underway in a matter of days, Blue Jackets head coach John Tortorella spoke with Aaron Portzline of The Athletic on the possible departure of the two stars and if the rumours will affect the club going forward.

“You guys have to report on it. It’s one of my biggest parts of my job this year, to handle it. Do we want those to be distractions? Are we going to be able to handle it as a room, or does it turn into a distraction? I think I need to coach that.”

“But s*** happens. We’re not the only team that has things go on like this.”

After being acquired from Chicago last summer in a deal that sent Brandon Saad back to the Blackhawks, Panarin set a career-high in points last season at 81 with 27 goals and 55 assists in 82 games. The 26-year-old winger made headlines earlier this summer when Panarin reportedly informed the team that he had no interest in inking an extension to stay in Columbus long-term.

Panarin and GM Jarmo Kekalainen reportedly met with Panarin to try and work out a deal, but limited progress was made. According to Portzline, Panarin and his agent, Dan Milstein, have set a deadline of Sept. 13 for the Blue Jackets to reach a deal. His current deal pays him an average annual value of $6 million per season.

“I look at Panarin … I really like coaching him. I really like him as a person, and I like him in our room. I think he’s contagious as far as how he comes to work and does his job with enthusiasm. I’m disappointed that there’s talk he may be leaving. But I’m not gonna coach him any differently. He’s going to be put in every damn situation I can find to put him in because he gives us a really good opportunity to win hockey games.”

ICYMI, The Athletic: State of the Franchise | Plenty to like about 2018-19 Blue Jackets, but uncertainty of Bobrovsky, Panarin futures cast a pall #CBJ https://t.co/Q4OILPitfP pic.twitter.com/nfnYkv6xFm

“I don’t think there’s been much conversation between (GM Jarmo Kekalainen) and Bob’s agent. We’re kind of in the dark a little bit. We have to assess our situation in that position because we’re not sure what Bob is going to do. I’m not going to lie to you. The uncertainty at the position, and Bob’s stance (in contract talks) has to play into it. That’s something Bob has to understand, too. I’m totally upfront and honest about that."

While the Blue Jackets are set on the backend with Seth Jones and Zach Werenski for the foreseeable future, losing both Panarin and Bobrovsky would be a huge kick in the stomach to a team that appears to be heading in the right direction. After falling to the Pittsburgh Penguins in the 2017 Stanley Cup Playoffs in five games, the Blue Jackets doubled their post-season win total last spring but ultimately were eliminated by the Capitals in six. Columbus took the first two games, but failed to take a 3-0 series stranglehold on the eventual Stanley Cup champions and failed to record their first series win in franchise history.

“If we win Game 3, we win that series and Barry Trotz is fired.”

If Panarin and Bobrovsky both leave the club, making the playoffs for the Blue Jackets is going to be a challenge in itself.

“We’re a pretty good team. We’re getting there. We want to be a great team, and start understanding what it is to make the playoffs every year. Remember, this is only twice (in a row). I’ve told you, you have to make it again and again and again. Well, it’s going to be hard to make it again. But that’s where we’re at now. Don’t think it’s just great that we’ve grown a little bit here. I don’t think we’ve scratched the surface as far as what it really takes to be that team in this league, and that’s winning some rounds. That’s getting in (to the playoffs) again. And when you get there, in the playoffs, you have to get something done.”